The use of vapes (e-cigarettes) to quit tobacco smoking is a controversial topic which continues to be debated internationally. In Australia, the sale and use of non-nicotine vapes by adults is controlled by state and territory laws. This means restrictions vary across the country. For example, vapes may be sold by retailers in all states and territories except Western Australia, but may not be sold to minors. In some states and territories, they can only be sold by licensed retailers. Nicotine vapes are covered by federal law, because nicotine is regulated as a poison by the Therapeutic Goods Administration (TGA). The sale and use of nicotine vapes is illegal without a valid prescription as described below. Analysis of the 2018-19 National Aboriginal and Torres Strait Islander Health Survey by the Australian National University found:

Aboriginal and Torres Strait Islander people who had tried vaping were more likely to be:

Vaping is increasingly popular in Australian youth who prefer vapes that are:

Many youth who vape have never smoked conventional cigarettes. This suggests that many people in Australia who vape are not using vapes to help them quit. Staying up-to-date with the evidence about vaping  is important as it is an evolving  area of study.

The NBPU TIS has created a factsheet and an infographic to keep you up to date. Click on the images below to access them. A detailed summary of relevant contemporary research on youth vaping and the impact of two evidence-based activities from Canada and the USA is available here. 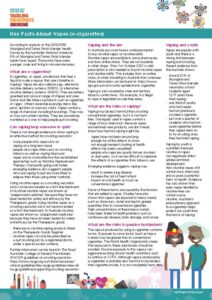 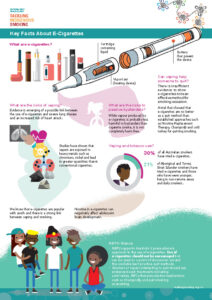 What are the risks of vaping?

Vaping may be less harmful than smoking conventional cigarettes. However, this does not mean that using them is harm-free. At the moment we don’t really know how harmful vaping might be because:

In 2022, a review of global evidence on the health effects of vaping was commissioned by the Australian Department of Health and conducted by the National Centre for Epidemiology and Population Health. You can read a summary of the findings here. Although we still need more and better research into the outcomes of vaping, the emerging evidence suggests that vaping:

Some of these harms are actually caused by the flavours that are added to vapes. Studies have shown that people who vape are exposed to heavy metals such as chromium, nickel and lead in greater quantities than in conventional cigarettes. High concentrations of these heavy metals have been linked to health problems such as cardiovascular disease, brain damage, and cancer. A 2021 study from Curtin University identified a number of chemicals in vapes that are known carcinogens. You can find out more about this study and the range of chemicals they found and their health risks by listening to this short podcast.

The emerging evidence also suggests that using vapes containing nicotine during pregnancy is at least as harmful for the baby as smoking conventional cigarettes. Animal studies have also shown that flavourings in non-nicotine vapes can affect the developing heart and lungs.

For more information on the safety challenges associated with vaping and implications for Aboriginal and Torres Strait Islander tobacco control, you can watch this webinar, hosted by the Aboriginal Health and Medical Research Council of NSW (AH&MRC). 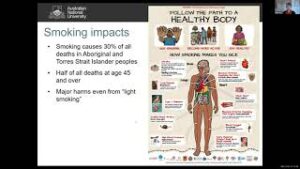 What are the risks to passive bystanders?

The vapour produced by vaping does contain toxins, although many of these are at lower levels than the smoke produced by conventional cigarettes. However, exposure to some toxins (such as heavy metals) may be greater than in conventional cigarettes. The World Health Organization states than any level of exposure to these substances may be harmful and should be avoided. We also know that passive exposure to e-cigarette vapour can aggravate existing chronic health conditions such as asthma or COPD. So those clouds of vapour are probably less harmful to bystanders than cigarette smoke, but they are not completely harm-free.

Can vaping help someone to quit?

The evidence is mixed around the effectiveness of vaping for quitting the smokes. International studies have found that many people who vape carry on smoking tobacco, although this may be at reduced levels. A trial carried out in the UK in 2019 compared NRT with vaping, and found that people given vapes were more likely to stop using conventional cigarettes than those given NRT. The people who vaped were also more likely to report maintaining this tobacco-free status at one year follow-up. However, this study does not provide enough evidence to support the use of vaping as a quit method since:

More recently, a trial in Australia found no advantage for vaping over standard NRT use for quitting smoking.

General Practitioners (GPs) have been able to prescribe nicotine vapes under a special access scheme since 2020. However, nicotine vapes are a last resort rather than a first line treatment. With a prescription, nicotine vapes are available in some pharmacies, and from online stores. They are not available in other shops. From 1 October 2021 a valid prescription is also needed to import nicotine vapes and nicotine refills from overseas. This includes from an online store, or when travelling to Australia from another country. You can read more about this new legislation here. To make sure all Australians were aware of this change in the law, the TGA ran a communication and education campaign. As a part of this campaign, NBPU TIS worked with TIS funded teams to co-redesign some of the TGA resources to ensure messaging was tailored to Aboriginal and Torres Strait Islander people. These resources are available to download here.

In the video below, National Coordinator for TIS, Professor Tom Calma AO answers questions about what vaping is, the laws around nicotine vaping, and the effectiveness of vaping as a method to quit smoking.

Is vaping a gateway to tobacco use?

There is a lot of debate about whether access to vapes creates a new pathway into harmful behaviours for the next generation. A recent review of the international evidence from ANU found that vaping was strongly associated with becoming a regular tobacco user. The study authors conclude that a gateway effect for vaping is supported by this evidence.

This is not the only concern with the popularity of vaping with young people. Vaping by young people is a problem because:

Even if vaping does not lead to conventional cigarette use, vaping can be addictive and harmful, so this is a concern. At a time when we know that fewer Aboriginal and Torres Strait Islander young people are taking up tobacco smoking than ever before, introducing a new pathway to harmful addictive behaviour is very worrying.

Seek advice from TIS workers from across Australia.
Post it to the National TIS Workers Yarning Group and get guidance from your tackling smoking colleagues.