Brief intervention (see Box 1) is accepted as an effective approach which increases quit rates in motivated individuals. This approach has been found to be most effective when combined with other interventions such as behavioural support, and nicotine replacement therapy (NRT). Although it is usually delivered in a one-to-one situation, increasing access to brief intervention training is an important and effective part of a population health promotion approach. This is because:

Specific barriers to the use of brief intervention with Aboriginal and Torres Strait Islander clients have been identified.

Cultural beliefs are particularly important, as they mean that brief intervention is often seen to be inappropriately telling people how to behave. 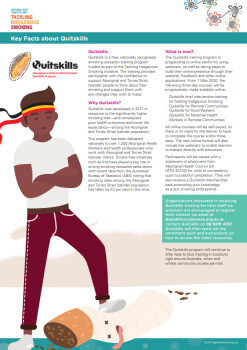 Quitskills is a free, nationally recognised smoking cessation training program funded as part of the TIS program. The training provides participants with the confidence to support Aboriginal and Torres Strait Islander people to think about their smoking and support them with any changes they wish to make. You can find out more about the Quitskills program from the Key facts about Quitskills factsheet.

More information on workforce training for brief intervention can be found here.

Box 1: What is a brief intervention?

Brief intervention makes the most of any opportunity to raise awareness, share knowledge and get someone to think about making changes to improve their health and behaviours. Brief intervention uses counselling skills such as motivational interviewing and goal setting. An understanding of the stages of behaviour change is also important. Brief intervention takes as little as 3 minutes and is usually carried out in a one-to-one situation. The 5As for smoking cessation for health professionals is an international smoking cessation framework used in brief intervention that has been shown to be very effective in encouraging and supporting smoking cessation. More information about the 5As can be found in this podcast developed for the National guide to a preventive health assessment for Aboriginal and Torres Strait Islander people featuring Professor David Thomas. 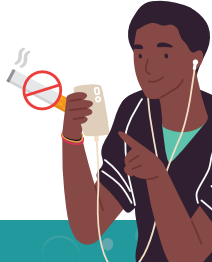 Social media and social networking tools such as Facebook, Instagram, TikTok, YouTube, Snapchat and Twitter are increasingly being used to help tackle smoking, particularly with young adults. One of the advantages of these platforms is that they are accessible, low cost and familiar to young people. About 20.5 million Australians are active users of social media – around 80% of the total population. Research by the McNair Ingenuity Research Institute in 2014 found that Facebook is a popular means of communication among Aboriginal and Torres Strait Islander people.

The use of Facebook and Twitter as a way of communicating is a popular approach for many healthcare services. However the value of these tools seems to lie more in their networking functions. Social media is interactive and user-driven, meaning it has the potential to provide real-time peer to peer support and discussion around tobacco use.

There is currently a lack of evidence of the effectiveness of using social media in tobacco control. Studies that do exist tend to be descriptive, with a focus on the acceptability of the medium to support quitting, or an analysis of posts. A study on using Facebook to reduce smoking among Aboriginal and Torres Strait Islander people found that there was potential for health services to incorporate a strategy of using paid local social media ‘champions’ or ‘ambassadors’ to disseminate tobacco control messages on Facebook through community networks. It also found that:

The NBPU TIS have produced a Key facts about social media factsheet and infographic that provide key information for TIS workers about using social media to communicate messages about smoking. 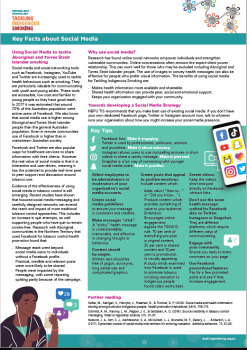 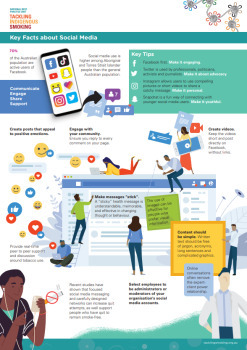 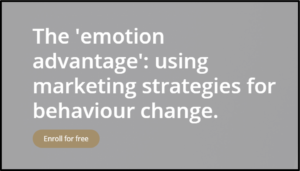 A bespoke online social media training course has been developed for the TIS workforce by Claudine Thornton Creative. You will learn about marketing terminology and consumer behaviour tactics. Understanding how marketers use emotion over logic in promoting cigarettes, means you can use the same tactics to persuade people to be smoke-free. The course focuses on how to use emotional availability to reverse engineer tobacco marketing. The course lasts around one and a half hours and comprises seven modules each split into 5-10 minute segments.So you can complete it in one go, or in short pieces. The course is free to access, simply open this link and then click the ‘Enroll for free’ button. 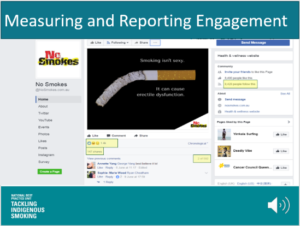 This presentation from A/Prof Penney Upton discusses the monitoring and reporting of social media activities, including:

Please note: The presentation will start playing automatically when opened.

Both approaches use education about the negative consequences of smoking and the benefits of not smoking for two purposes:

It is thought these campaigns help to prevent smoking by changing people’s expectations toward smoking, so that tobacco use is no longer accepted as the ‘usual, cool or necessary thing to do.’

A 2021 publication from the Mayi Kuwayu study showed that education provided by the TIS program has changed awareness and understanding of the impact of smoking on long term health in Aboriginal and Torres Strait Islander adults. We know that negative attitudes towards smoking are an important precursor to smoking behaviour change. Anti-smoking attitudes are more likely to lead to quit attempts, and to successful long term smoke free living.

There is evidence that both mass media and social marketing campaigns can help prevent smoking from starting, encourage people to stop smoking, and prevent relapse among recent quitters by reminding them about why they chose to stop smoking. However one of the biggest effects is in relation to promoting access to cessation support services such as Quitline, counselling and other health professionals. Developing capacity to support people who are ready to quit – by taking the systems approach described under Planning, is therefore essential if programs are to be sustainable.

A campaign’s impact is influenced by: 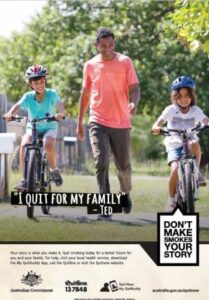 The relevance of the message has been found to be important for audience engagement. The context, characters and role models used in advertising or community activities must seem believable, if people who smoke are to connect to them. When a campaign does not relate to how people see themselves, they find it hard to become interested in the content. While there is some evidence that mass media campaigns do influence attitudes and beliefs of Aboriginal people and Torres Strait Islanders in regard to smoking, more specific local messages tailored for Aboriginal and Torres Strait Islander people seem to be most effective. Evidence from the Talking About The Smokes project also supports the importance of using targeted advertising.

The Australian Government’s Don’t Make Smokes Your Story campaign is a good example of how advertising and community-based activities can work together to encourage behaviour change among Aboriginal and Torres Strait Islander people who smoke. You can adapt and use these materials and resources for your own activities.

Reducing second-hand and third-hand smoke is an important aim. This is because second-hand and third-hand smoke can be very harmful. The evidence also shows that if smoking is seen as ‘normal’ at a community level, young people are more likely to start smoking, and people who currently smoke will find it harder to quit. Increasing the extent to which a community is smoke-free is associated with less smoking and more success in quitting. A 2021 publication from the Mayi Kuwayu study showed that areas of Australia where the TIS program is present, compared to non-TIS areas, have a significantly lower prevalence of smoking inside households.

Relevant activities include the following:

Developing smoke-free policies in the workplace 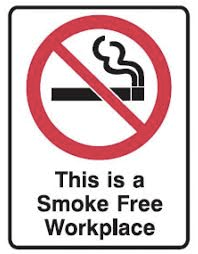 To be successful, smoke-free policies need community participation – not just consultation – in their development. Policies that have local ownership and commitment are more likely to be followed. There is also evidence that introducing smoke-free policies in the workplace can lead to increased support for smoke-free spaces in other areas such as smoke-free homes and cars. Successful smoke-free workplace policies also result in more workers wanting to quit.

Combining locally owned smoke-free policies with access to quit support services increases the success of these policies. Working in an environment with a smoke free policy can also encourage individuals to quit.

The Aboriginal Health and Medical Research Council (AH&MRC) of New South Wales provide a good set of resources to help you support workplaces to set up smoke-free policies.

provides: advice on how to begin the process; templates for worker consultation; and templates to assess how much smoking happens at work.

Second-hand smoke is also believed to contribute to the risk of sudden infant death syndrome (SIDS).

Less well known, but probably just as harmful is third-hand smoke. Third-hand smoke is the tobacco smoke toxins from second-hand smoke that get into people who smoke’s hair and clothes and build up on surfaces and dust in areas where people smoke. Evidence shows that these toxins stay in homes and cars for a long time after the cigarette has been extinguished, even several months later. They may even become more toxic over time. 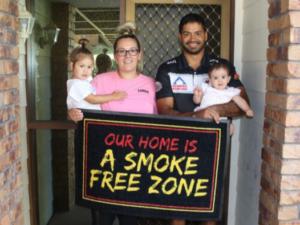 Third-hand smoke is an emerging area of research and we don’t yet understand all the health hazards. However, children (especially infants), are more vulnerable to third-hand smoke toxins. This is because infants crawl over contaminated floors and mouth contaminated surfaces like furniture and toys. We also know that infants consume up to a quarter of a gram of dust every day. That’s twice as much as adults.

A 2018 review found that intensive counselling methods or motivational interviewing with parents to be most effective for reducing children’s tobacco smoke exposure in the home. There is some indication that school-based education, intensive home visits, brief education provided to parents in clinics (including scheduled children’s health checks) and culturally sensitive health promotion brochures may also help reduce second-hand smoke in the home and car.

Menzies School of Health Research has developed Healthy starts: reducing the health effects of smoking around Indigenous babies and children, a resource to support health providers when discussing second-hand tobacco smoke with families, and to encourage families to have smoke-free homes. 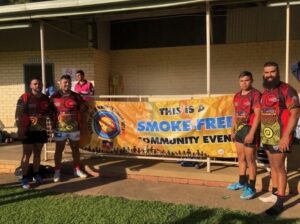 Any opportunity to reduce second-hand smoke is a good investment because there is no safe level of exposure to second-hand smoke, and smoke-free events both denormalise smoking and encourage people to think about quitting. The Talking About The Smokes (TATS) study found that support for smoke-free festivals and events is strong in Aboriginal and Torres Strait Islander communities, particularly among those who don’t smoke:

Pledging to be smoke-free demonstrates an active commitment and motivation to change. Evidence shows that when someone makes a public declaration (pledge) they are more likely to follow through with that promise, both for themselves, but also because of what others might think of them if they don’t maintain their promise. We also know that people are more likely to stick with a commitment that has real value, purpose and meaning to them.

Smoke-free pledges are a good population health promotion tool because: 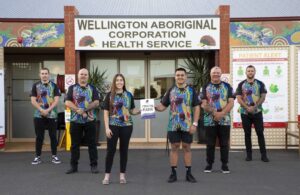 The Wellington Aboriginal Corporation Health Service Quit B Fit Team encouraging people to take a pledge to not smoke in their homes, cars and workplaces

You can find further information on smoke-free environments in the video and factsheet produced by NBPU TIS which can be downloaded here.